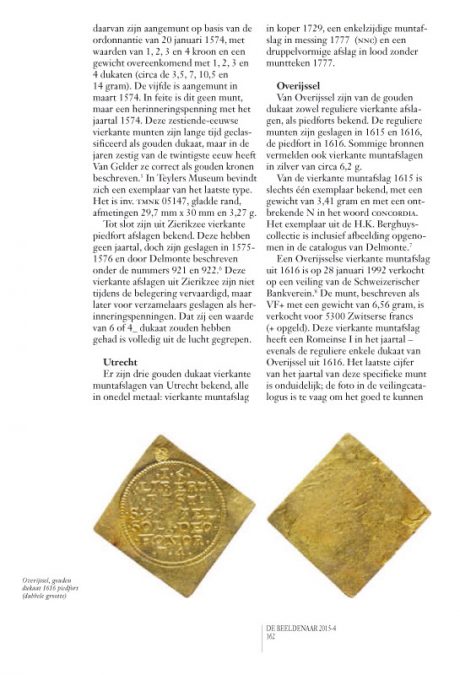 During my studies on the Dutch gold ducats I found a couple of square gold ducats, known as klippes. The square shape of the coin is unusual for Dutch ducats, but it was typical of siege coins (noodmunten), minted in various metals, including gold. These coins were often referred to as klippes or clippes.

A klippe is a coin usually struck on a square planchet, however it may be also a rectangular or lozenge-shaped planchet. These planchets were literally clipped (cut out) of a larger sheet of beaten gold or other metal with a pair of shears into the size and weight needed. The weight, and fineness, of the precious metal used in coins was as prescribed by law, regardless of what shape it was in. However, as we can easily see with the coins described below, the weight of the klippes is significantly higher than the weight of the regular strikes of ducats minted in the same year. The additional weight of the klippes is found in the additional area around the regular round shape. This is how and why we may often find klippes of approximately double ducat weight even though their thickness is similar to the thickness of regular single ducats, and piedfort klippes of approximately quadruple ducat weight which have a thickness double that of the regular single ducats.

Square gold ducats were minted in Low Countries by provincial mints of Gelderland, West Friesland, Zeeland, Utrecht, Overijssel and by the city mints of some of these provinces.

Two dates when klippes of this province were minted are known: 1637 (gold ducat klippe) and 1643 (gold ducat piedfort klippe).

Three copies of the Gelderland 1637 gold ducat klippe are known. The first is found in the Amsterdams Historisch Museum, (inv.nr. KA 10469), weight: 7.28 gm, plain edge, dimensions 22×22 mm. The coin was donated to museum on October 28th, 1887, from the Jhr. A.P. Lopez Suasso collection. This exact specimen is listed by de Voogt in the Suasso collection as a â€œsquare proofâ€. There is a dot minted between knightâ€™s knees.

The second copy is found in De Nederlandsche Bank (The Dutch Bank), in the Nationale Numismatische Collectie NNC. Weight: 6.80 gm. The third copy is listed by Dick Purmer as a klippe of this date with the weight of 6.90 gm, but its provenance is unknown.[1] 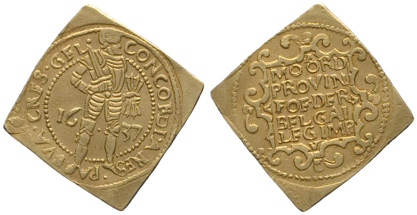 The West Friesland 1637 gold ducat klippe originated from the Nationale Numismatische Collectie, its weight is 6.87 gm.

The West Friesland 1662 gold ducat klippe is listed by Kees Pannekeet as originating from the collections of West Friesland Museum in Hoorn with a weight of about 7 gm.[4]

There are no Zeeland gold ducat klippes, minted in gold known. However, there are three afslags, klippes made of copper, minted with the dates of 1749, 1802 and 1804.

There are also piedfort klippes of the Zierikzee mint known. They were minted without date in the years of 1575-1576 and are listed by Delmonte with the numbers 921 and 922.[6] However, those gold klippes were not minted in Zierikzee during the siege, but after it, as memorial pieces for collectors. Their appointment as being multiple ducats with a value of 6 or 4 Â½ ducats seems to be entirely artificial.

Regular and piedfort gold ducat klippes of Overijssel are known. Regular strikes were minted in 1615 and 1616, piedfort klippes in 1616. Some sources also mention 6.2 gm klippes, and silver afslag klippes from this province.

There is only one copy of the Overijssel 1615 gold ducat klippe known, it has a weight of 3.41 gm and the N of CONCORDIA is missing in the legend. It is from the H. K. Berghuys Collection and is listed with a picture by Delmonte in his catalog.[7]

Overijssel 1616 gold ducat klippe: this klippe was sold at the SBV (Schweizerischer Bankverein) Auction 29, January 28, 1992, Lot 1117. [8] The coin was listed in the auction catalogue as VF+, weight 6.56 gm and was sold for 5,300 CHF (+ Buyerâ€™s Premium fee). This klippe type can be identified by the Roman I in the date â€“ the same as on regular Overijssel 1616 single gold ducats. The last digit in the date of this particular specimen is unclear; the picture in catalogue is too weak to read the date. It is also worth noting that the square planchet of the SBV klippe is significantly larger than the Amsterdams Historisch Museum copy of the same date, listed below. In addition, on the Amsterdams Historisch Museum copy there is no ribbon around the bunch of arrows in the knightâ€™s hand on the obverse. However, the copy auctioned in Switzerland has a single ribbon around the bunch of arrows, like on regular single ducats of this date. 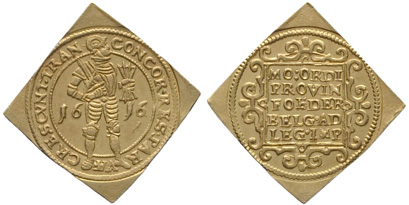 Overijssel 1616 gold ducat piedfort klippe: this coin originated from the Amsterdams Historisch Museum, inv.nr. KA 11640, weight: 12.03 gr, plain edge, dimensions 24 x 23 mm. The coin, minted in Zwolle or Kampen, was donated to the museum on October 28th, 1887, formerly it was in the Jhr. A.P. Lopez Suasso collection. This klippe type has a decorative 1 in the date, (not a Roman I).

In 1615 afslags, klippes of gold ducats made of copper, were minted in Deventer in silver (NNC possesses a gilded copy). In addition, there is only one known copy of the Deventer 1666 afslag of a single gold ducat.

The Deventer 1615 gilded silver klippe is listed by Droogleever (and after him by other authors) as number 97bis.[9] Deventer 1666 gold ducat klippe: this coin was sold in the Laurens Schulman auction 28, Lot 629 and Sotheby Parke Bernet & Co. auction 29 (1979), Lot 135 . Weight was 7.03 gm. This klippe type is usually incorrectly listed (Delmonte 1090, Droogleever 171bis) as a double ducat klippe.[10] However, it is a single ducat klippe, but with the weight of a regular double ducat.

Two piedfort klippes were minted in Kampen with the dates of 1646 and 1664.Â The 1646 gold ducat klippe from Kampen was sold at the Jacques Schulman auction 182, Lot 798 (weight was 7 gm).Â As for the 1664 klippe, there is no further information known.

Generally, all klippes of gold ducats are an extremely rare.Â Their significant historical value and their rarity is reflected by the very high prices they bring in the few auctions in which they occur. A numberÂ of these klippesâ€™ origins from important collections, such as that of Johan Wilhelmus Stephanik (1860-1905) and Gerard Munnicks of Cleves (1797-1860). In addition to allÂ copies in private hands, there are pieces in museum collections, such as Teylers Museum, Nationale Numismatische Collectie and Amsterdam Museum.Â Square gold ducats are almost always well preserved â€“ they often show an amazing, almost mint condition.Â The klippe of the 1635 West Friesland gold ducat from Teylers Museum collection is one of the most beautiful Dutch gold ducats of the thousands of ducats Iâ€™ve even seen. 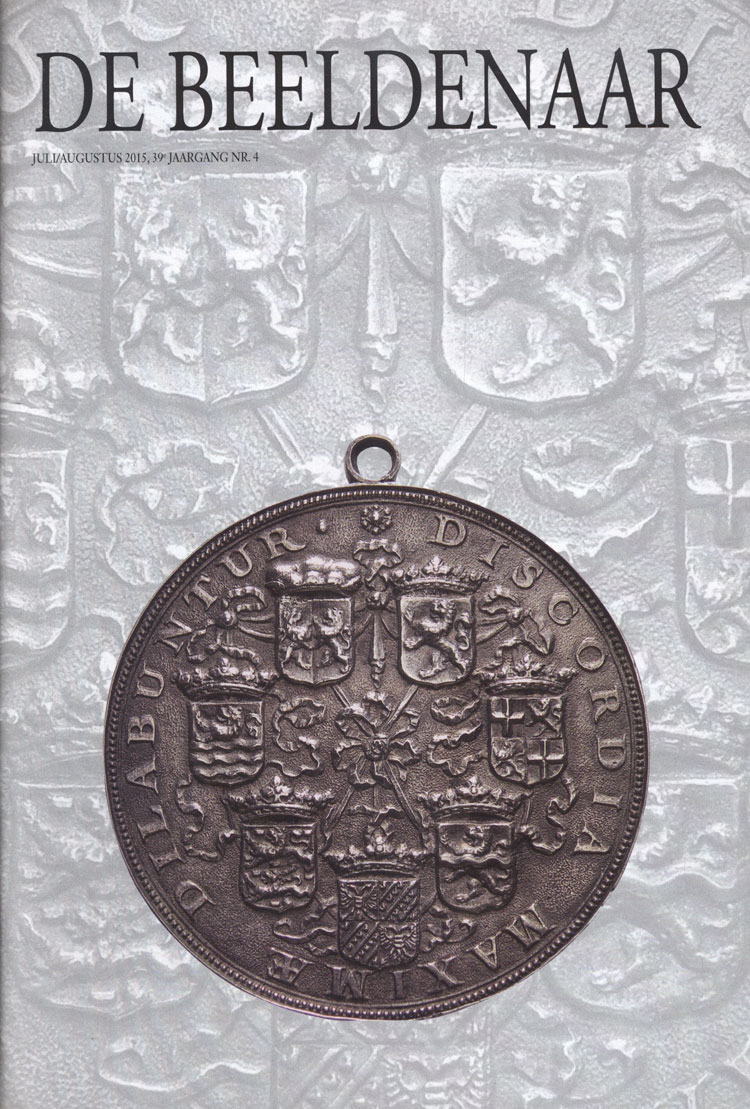 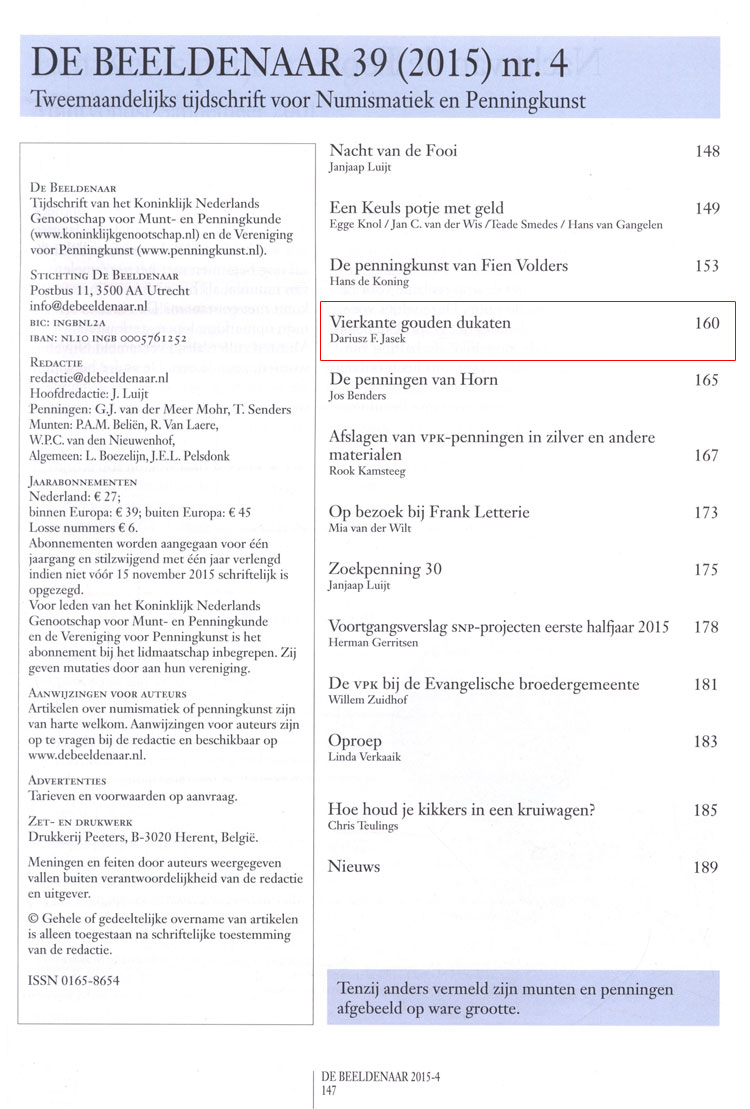 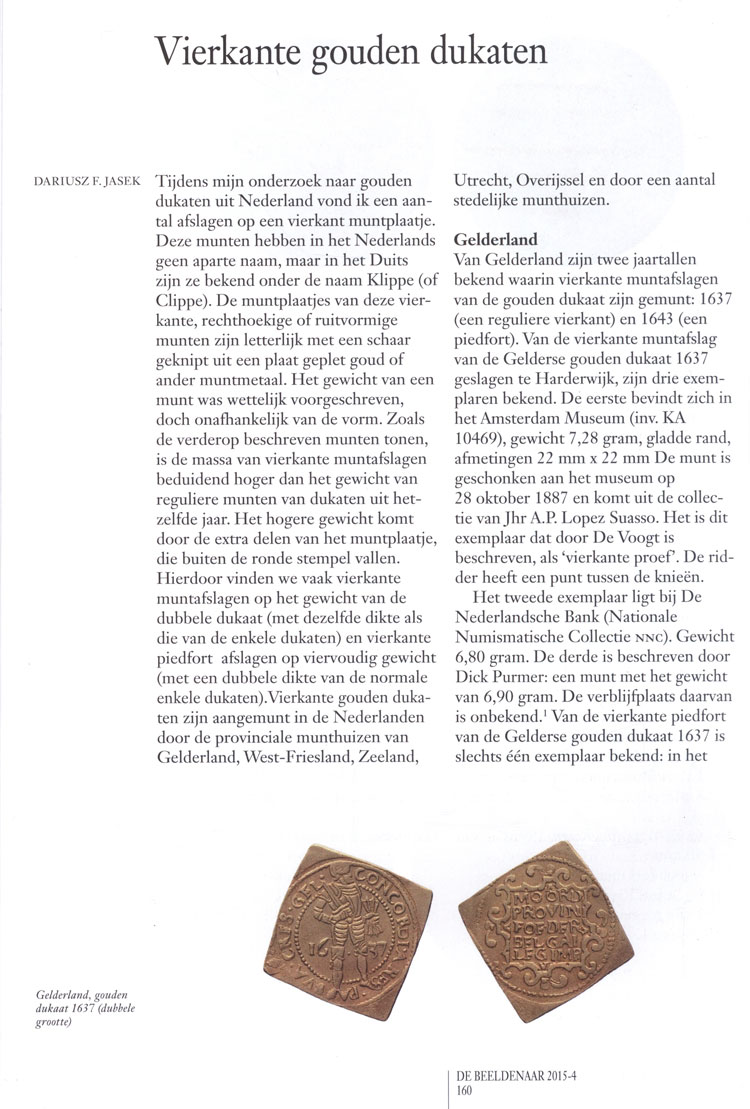 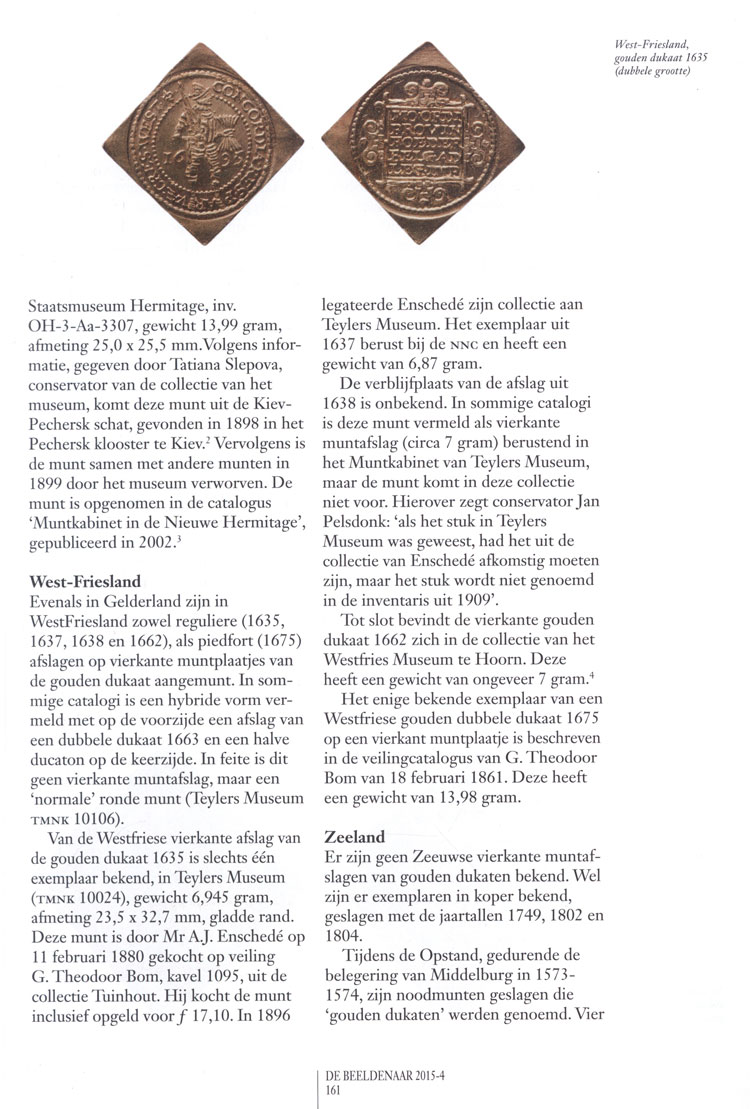 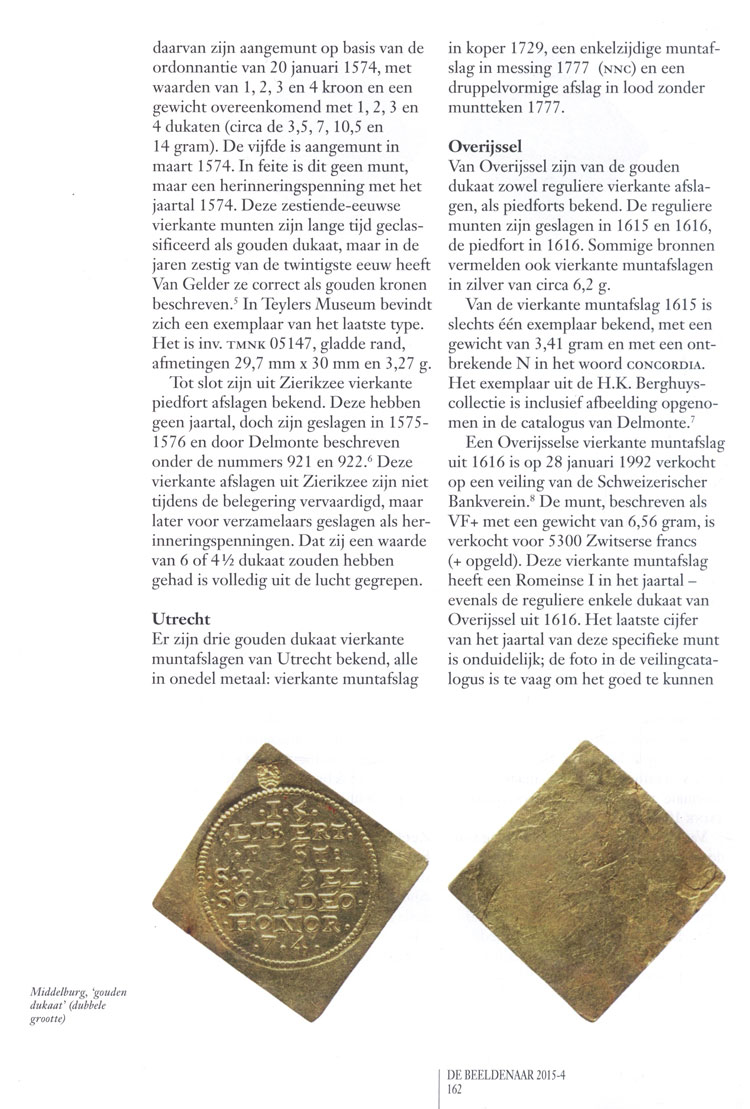 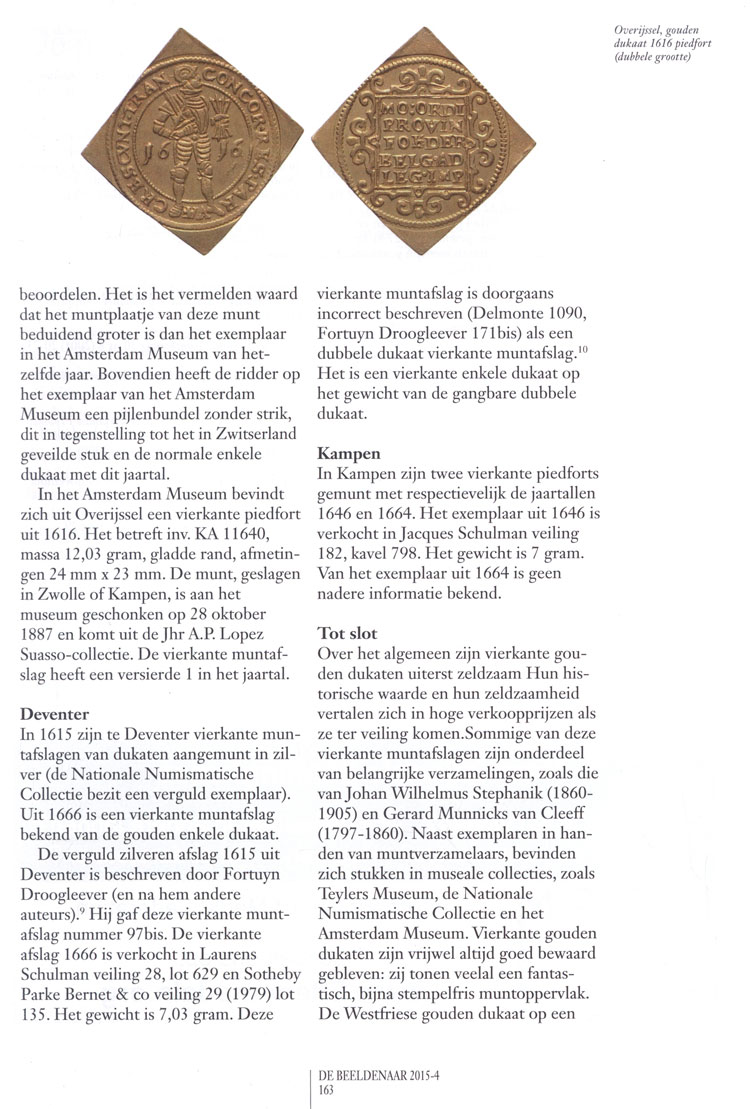 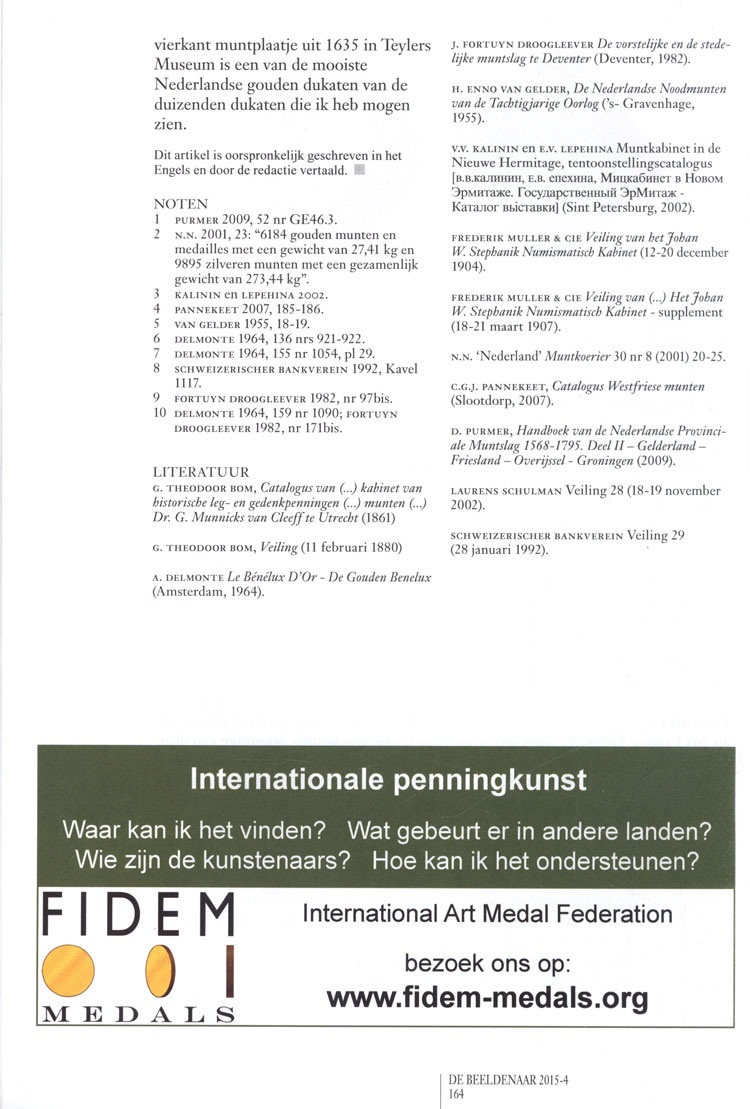