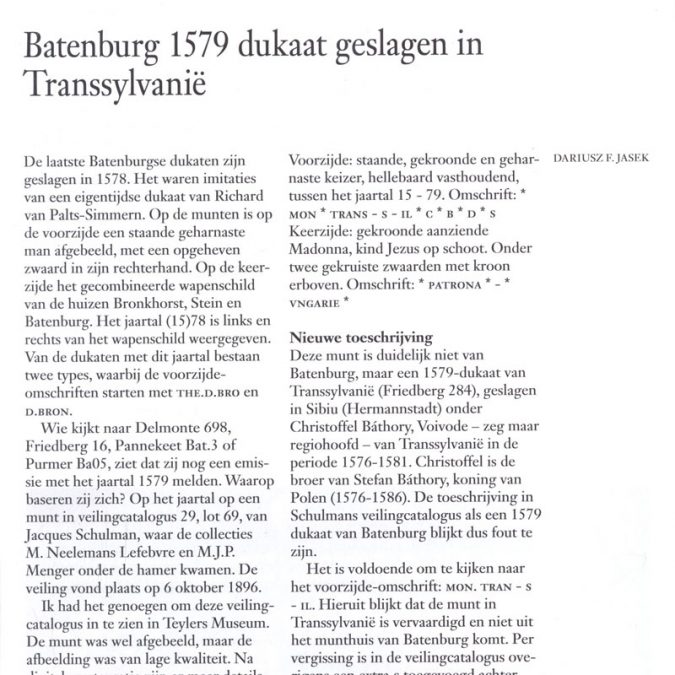 The latest gold ducats were minted in Batenburg with the date of 1578 and they were imitations of a ducat minted at that time by Richard of Simmern Palatinate. They were minted with a standing armored man, with the sword pointing up in his right hand on the obverse, and with a quintuple arms (combined coats of arms signifying the houses of Bronckhorst, Stein and Batenburg) on the reverse. Date of (15)78 was minted on both sides of the shield. Ducat from 1578 is known in two types: with the obverse legends starting with THE.D.BRO and D.BRON. The second one is more scarce.

But itâ€™s enough to give references to Delmonte 698, Friedberg 16, Pannekeet Bat.3 or Purmer Ba05 to understand that a significant number of catalogues list Batenburg 1579 as the last date of gold ducats from this mint. Why they do it? Because this date is to be found in Jacques Schulman auction 29, sale of M. Neelemans Lefebvre and M. J. P. Menger collections, Lot 69. Auction took place on October 6, 1896.

I had the pleasure to browse an auction catalog from this auction in Teylers Museumâ€™s archives. Picture printed in catalog was very low quality, however after digital restoration we may read details from the coin. Whatâ€™s more, the legend of both sides is written in the catalog, next to the coin description:
Obverse: An emperor standing armored and crowned, holding a halberd. On both sides of the man written date: 15 – 79.
* MON * TRANS – S – IL * C * B * D * S
Reverse: Crowned Madonna full face, with the child Jesus on her lap. Beneath two crossed swords with a crown above.
* PATRONA * – * VNGARIE *

Undoubtedly it is not Batenburg 1579, but a Transylvania 1579 ducat (Friedberg 284), minted in the Hermannstadt mint under Christoph Bathori, incorrectly identified in Schulmanâ€™s auction catalog as a Batenburg 1579 ducat.

It is enough to look at the obverse legend to read MON. TRAN – S – IL. It means that the coin is minted in Transylvania and does not come from the Batenburg mint. By editor’s mistake an additional S added behind TRAN. in the auction catalog.

The legend ends with C. B. D. S. At first I suspected the latter S means Sibiu, because the coin bears the coat of arms of Sibiu. After a closer look I found that C. B. D. S. letters indicate the Transylvanian Voivode, Christopher BĂ¡thory the SomlyĂ³. This way the complete legend on the gold ducat with St. Victor and Madonna, previously incorrectly identified as Batenburg 1579 ducat, says: Moneta Transsylvaniae (from) Christophori Bathori The Somlio, or “Coin of Transylvania, minted in the name of Christopher BĂ¡thory of SomlyĂ³”. 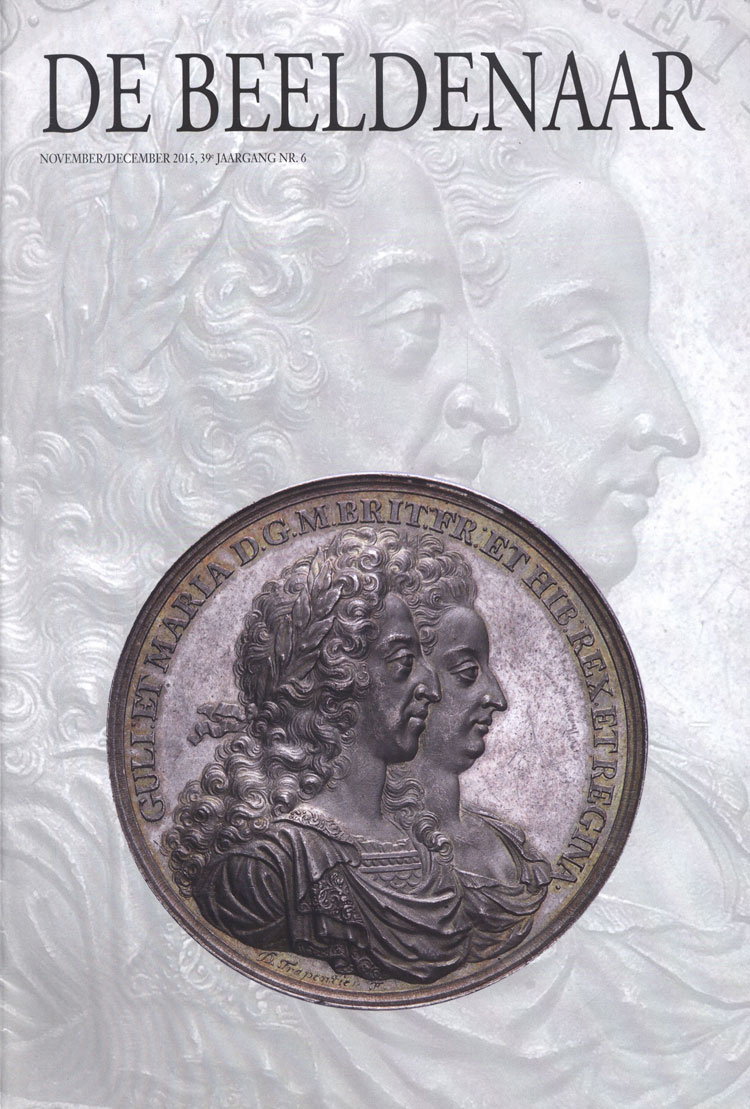 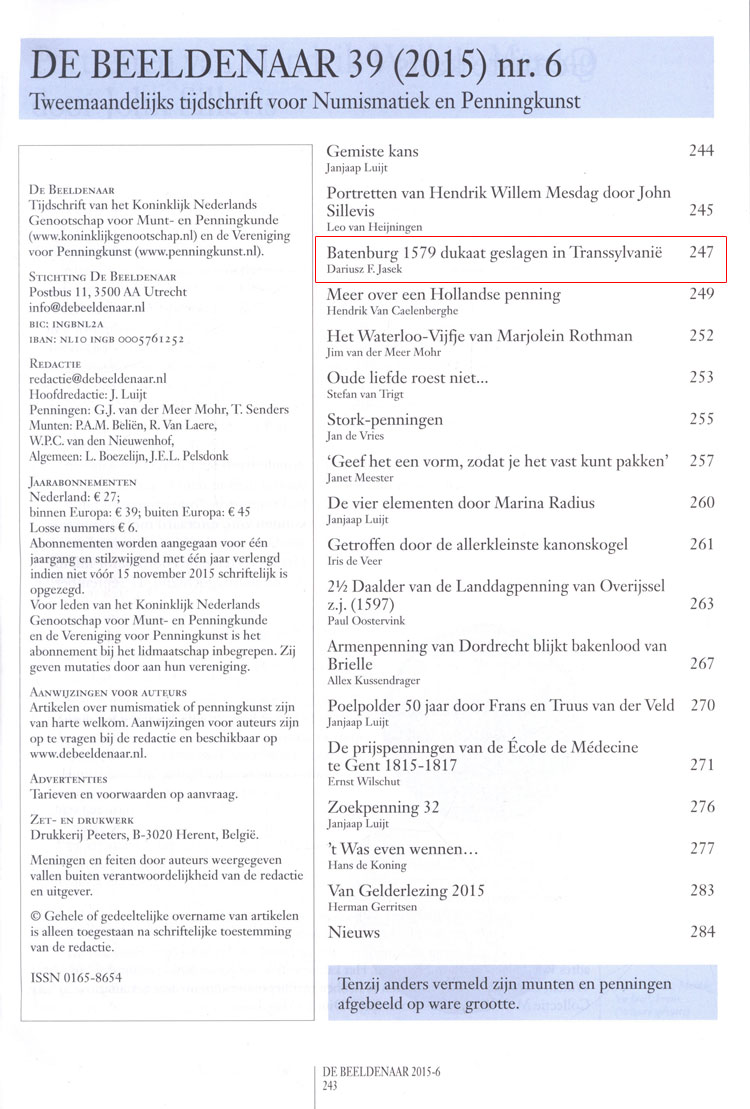 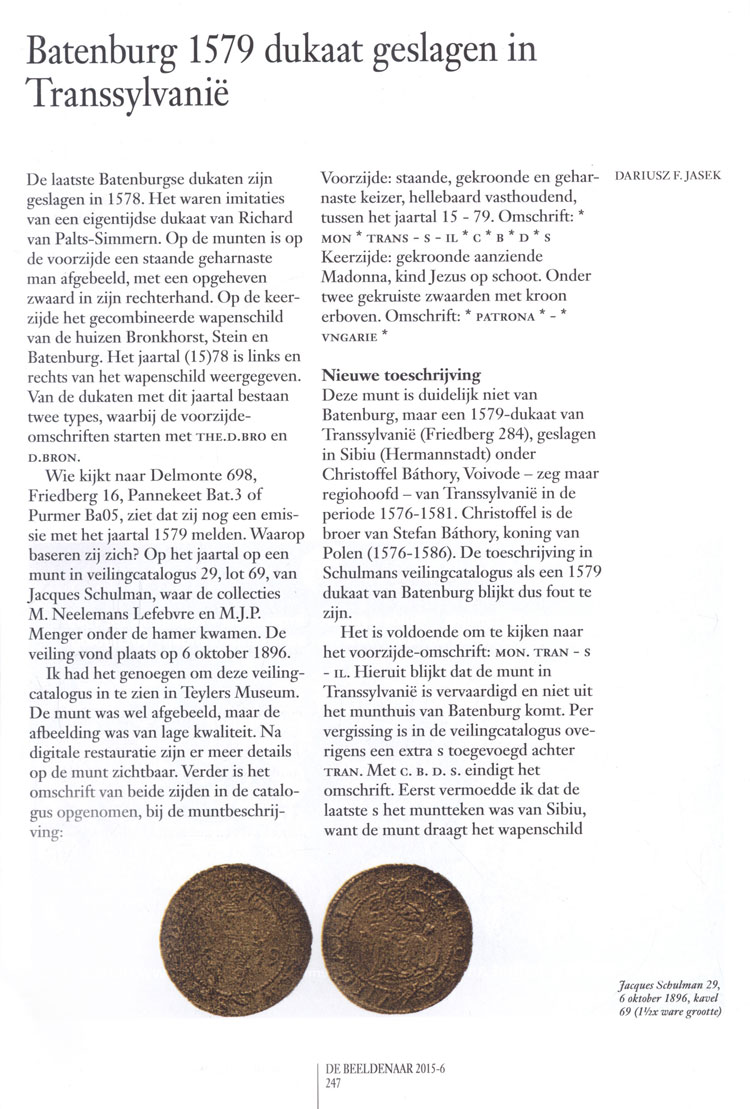 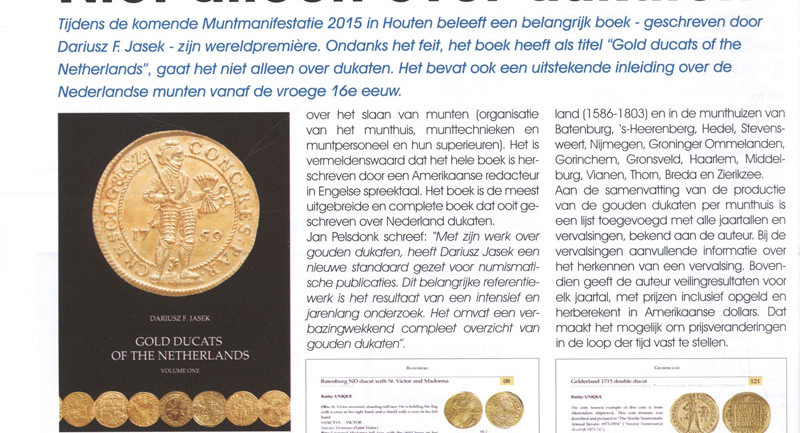