Imitations of the Netherlands gold ducats are easily found all over the world. In general, imitations are duplications of the master coin (which is a Dutch ducat here) outside its place of issuing. Thanks to external conformation of an imitation and the genuine coin, circulation of the imitation is possible. Thanks to wide acceptance of the Dutch gold ducats in the 16th, 17th and 18th centuries, many imitations of these coins are found in various European countries. Imitations are never intended to be identical with the master coin – for instance the Polish 1831 Uprising ducat is an imitation of the Dutch gold ducat. The Warsaw mint mark (eagle) on this coin is entirely different from the Utrecht mint mark (caduceus). 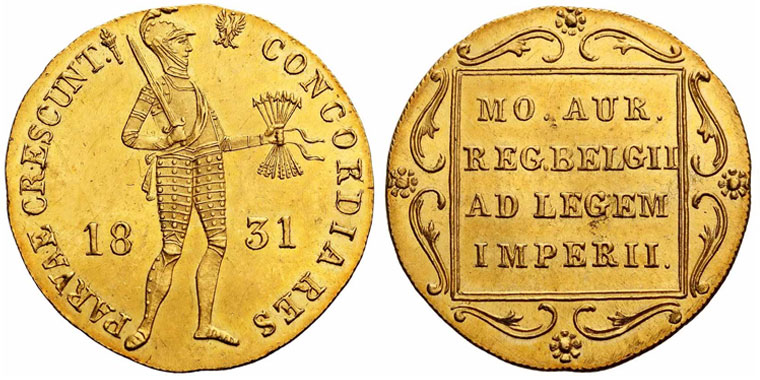 The most numerous are imitations of the Netherlands gold ducats minted by a number of the German mints. Klagenfurt minted imitations with the obverse of the Dutch type. The design of both sides was copied on a few types of the Emden, Glückstadt and Aachen ducats. The Frankfurt, Nuremberg and Lübeck mint only copied the ornamented square from the reverse side. Of all German mints, the mints of Hamburg and Mainz minted the most imitations of the Dutch type. In Hamburg this type was minted for a century, and in this period the design of imitations was reevaluated. From about 1818 the knight replaced the tower on the obverse. After 1852 the design of the ornamented square was also changed. In Mainz a number of single and double ducats of the Dutch type were minted. In Italy gold ducats of the Dutch type were minted in Desana, Maccagno, Tassarolo, and Retegno mints in the 17th century. Retegno minted double ducats in 1677. Poland minted gold ducats of the Dutch type at the Stettin mint about 1630 and subsequently under the reign of the King Stanislaw August Poniatowski. Copies with the date from 1766 to 1795 are known, however from 1780 ducats without the square outlining the legend on the reverse were minted. The most famous imitation of the Dutch type ducats is the Polish Uprising ducat minted with the date of 1831 with the Polish eagle instead of the caduceus mark. In France the Besançon mint minted a number of half ducats and single ducats in the mid-17thcentury. In the same period the rare Strasbourg ducats were minted. The design of both sides was copied on ducats minted by the Orange mint in 1645. Switzerland minted single and double ducats of the Dutch type in the Geneva mint. The Liège mint (Belgium today) produced ducats without a date and a number of ducats with the date. In Russia various types of gold ducats are known. They were minted in the last decade of the 18th century. All imitations from Switzerland, Belgium and Russia were minted with an ornamented square around the legend. 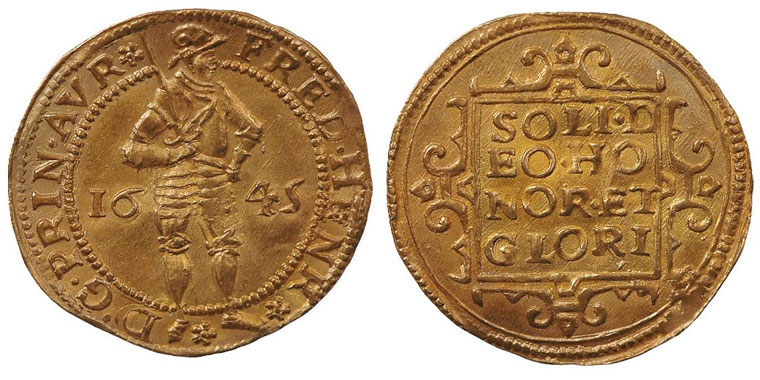 In contrast, forgeries (aka counterfeits or fakes) are not genuine coins. They may be minted by particular people as well as by countries, against the will of the issuing authority. Counterfeits of the Dutch gold ducats were excessively minted in the late 18thcentury and especially in the 19th century in St. Petersburg (Russia); they are so-called Russian strikes (they were minted in addition to the Russian imitations of the Dutch ducats). Russian strikes were minted at the St. Petersburg mint from 1768 until the 1870s. However, since they were minted against the will of the issuing authorities (The Netherlands) and were intended to be identical with the master coin, we cannot call them imitations, but counterfeits. Despite the fact that the Netherlands actually temporarily stopped minting ducats in 1849, and sent a formal diplomatic message to the Russian court, asking them to stop minting the counterfeits, these Russian counterfeits with the date of 1849 were minted in large numbers for about two decades. Some of the St. Petersburg mint records, as well as lead trial strikes, that document all of this still exist today.

Debased coins minted by some of the Dutch mints are also worth mentioning here. In the period before the United Provinces material delivered to mints was brought by the local merchants as well as by German merchants. They always wanted to mint as many coins as possible from the material supplied and thereby started the phenomenon of hagemunten in that area. Hagemunten were unofficial or semi-official mints. Their right to mint coins was somewhat obscure and they often did not allow control over the mint or the coins they had minted. Because of the Eighty Years’ War (1568-1648) the control of the government over the land and over these hagemunten was weak, so they grabbed every opportunity to mint mostly inferior quality coins.

Read more in the book