With the edict of Leicester, dated October 4, 1586, gold ducats of the Dutch type were introduced. They were supposed to be minted from .986 gold, with a weight of 3.515 gm. On the obverse they bear the knight holding a bunch of arrows in the left hand and a sword in the right hand. The legend on the rim, CONCORDIA RES PARVAE CRESCUNT (or its shortened version), usually ended with a mintmark. On the reverse the legend was written in 5 lines inside the ornamented square: MO ORDI / PROVIN / FOEDER / BELG AD / LEG IMP. The only different ducats were minted by the Imperial mints of Deventer, Kampen and Zwolle. They were minted with the picture of the Emperor and with his name in the legend on the obverse. The name of the city, where coins were minted, was written in the reverse legend.

Examples of the NetherlandsÂ ducats from The Kosice Gold Treasure, minted in the provincial period.

Gold ducats were minted by provincial mints of:

Ducats of the Dutch type are those with a knight holding a bunch of arrows in his hand on the obverse and a square with inscription on the reverse, minted since 1586. The number of arrows on the obverse varied at times between 3 and 8. Some of the early ducats were minted with 4 arrows though they were by design supposed to have 7 arrows (despite the fact that in the Edict from 1586 a drawing with 5 arrows is shown!). Some of the Gelderland ducats minted in 1648-1650 are known with 3 arrows. The number of 8 arrows is known on some Utrecht ducats from late 18th century, but that was probably just a die sinker’s mistake. The number of arrows on the coin, in and of itself, cannot be used to determine that the coin is a forgery. 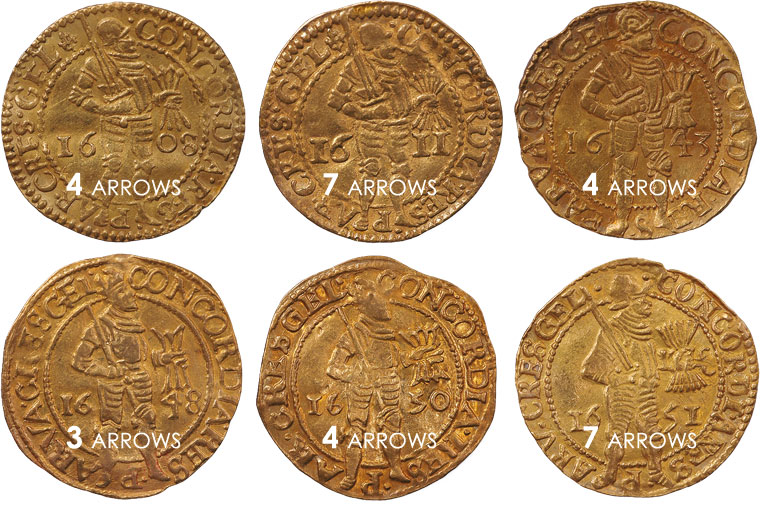 A great collection of over 1,000 gold ducats from the provincial period is available for viewing in the Kosice Gold Treasure. You may find more about this coin find on this site: THE KOSICE GOLD TREASURE.