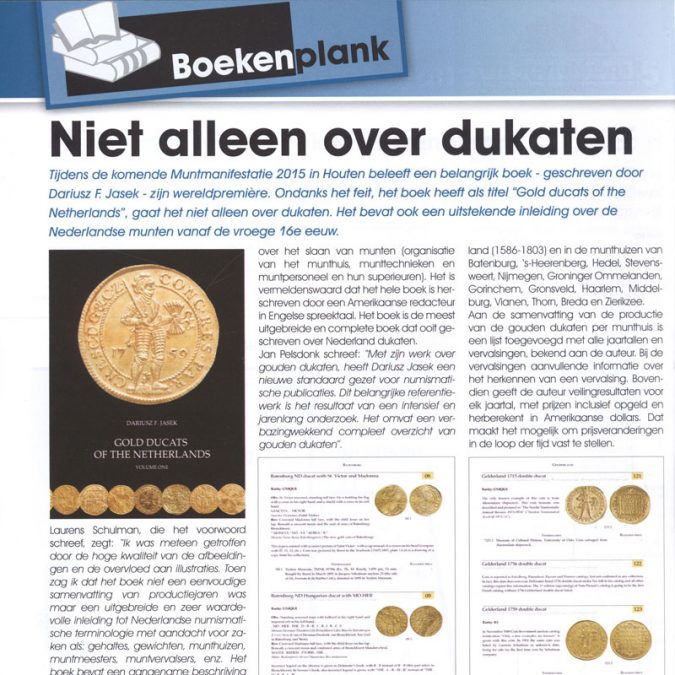 On the upcoming MUNTMANIFESTATIE 2015 in Houten an important book written by Dariusz F. Jasek will have its world premiere. Despite the fact, it is entitled Gold ducats of The Netherlands, it is not a book only about ducats, because it has got an excellent introduction to the Dutch coinage from the early 16th century onwards. Laurens Schulman, who wrote a foreword for this book, said: â€I was immediately struck by the high quality of the illustrations – and the abundance of them. I then saw that the book was not a mere summary of production years but rather a comprehensive and very worthy introduction to Dutch numismatic terminology, compositions, weights, mints, mint directors and coin counterfeiters, etc. The book presents an enjoyable description of the history of the gold ducat, including some interesting facts about foreign imitations – well documented and accompanied by many illustrations. In other words this book will certainly be appreciated by avid collectors, but professional numismatists will also find it beneficial. We do indeed need, and want, this book.â€.

Indeed, the catalogue part is preceded by almost a hundred pages of an introduction chapters, including also chapters, like an extensive chapters about history of the Dutch â€œGolden Ageâ€ (trade with the VOC, countermarked ducats and imitations of the Dutch type minted in other countries), coin counterfeiters (includes also information about various penalties for mintmasters minting debased coins) and about minting coins (organization of the mint, minting techniques and mint personnel and their superiors). It is worth mentioning that the whole book is re-written by an American editor in conversational English language.

The book is the most extensive and complete book ever written about Netherlands ducats. Jan Pelsdonk wrote â€œWith his work on gold ducats, Dariusz Jasek has set a new standard for numismatic publications. This important reference work is the result of an intensive, multi-year research. It covers an astonishing complete range of gold ducats.â€. The book is based on 5 years research and a database of over 20,000 records. On 352 pages (A4 size) we may find over 600 pictures of almost 300 coins, of which a large number are unpublished photos of rare coins (including former Geldmuseum specimens). All pictures of coins in the book are enlarged by 150% with some details enlarged by 750%. In addition, 97 coins are unlisted by Delmonteâ€™s book. Whatâ€™s more, a large number of varieties listed for each date.

The first volume covers coinage of the Gelderland mint (1586-1803) and mints of Batenburg, â€˜s-Heerenberg, Hedel, Stevensweert, Nijmegen, Groninger Ommelanden, Gorinchem,
Gronsveld, Haarlem, Middelburg, Vianen, Thorn, Breda and Zierikzee. The summary of gold ducatsâ€™ production for each mint is appended with the list of all afslags and forgeries of particular dates, known to the author. Forgeries are given with an additional information about how to recognize a forgery. In addition an author gives also auction results for each date, with prices including Buyerâ€™s Premium and recalculated to US Dollars. It makes possible to follow trends of price change in time.

Arthur Friedberg, an author of the reference book â€œGold Coins of the Worldâ€ wrote: â€œThe thoroughness of the research and the amount of information now available in one source is remarkable, and perhaps unprecedented. Certainly, for anyone interested in the more than four centuries of gold ducats in the Netherlands, be it a dealer, auctioneer, or serious collector, this work is a necessity.â€.

During MUNTMANIFESTATIE 2015 it will be possible to talk to the author and buy a signed copy of the book in a special, introduction price. 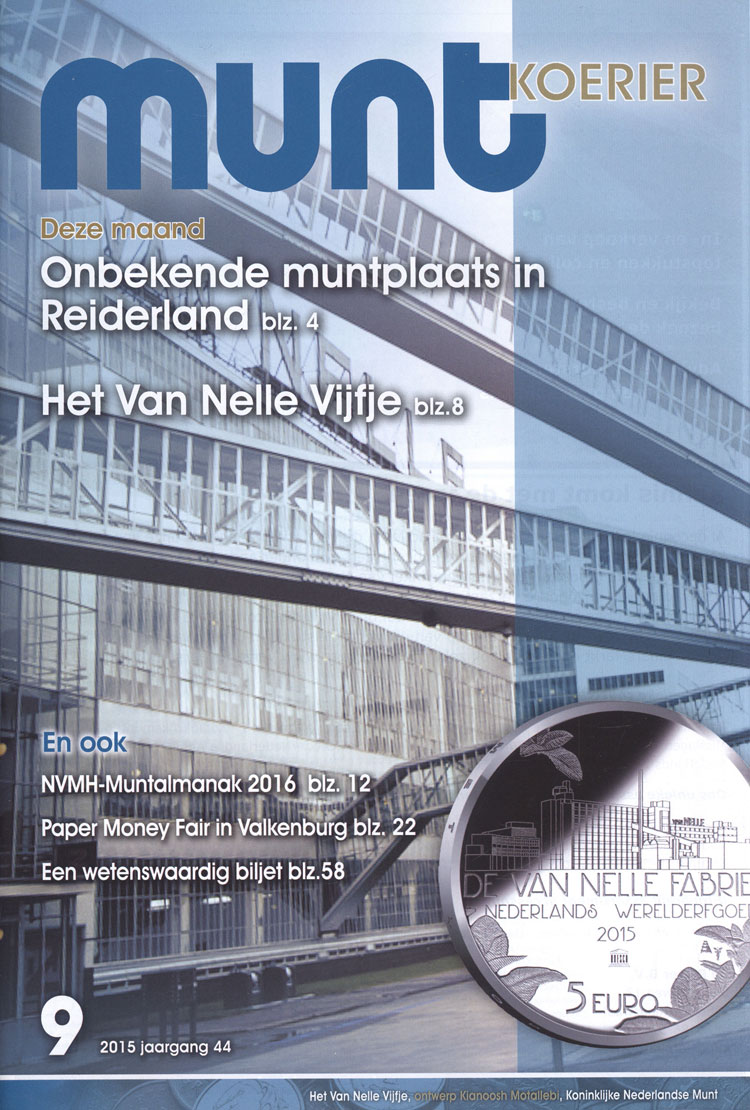 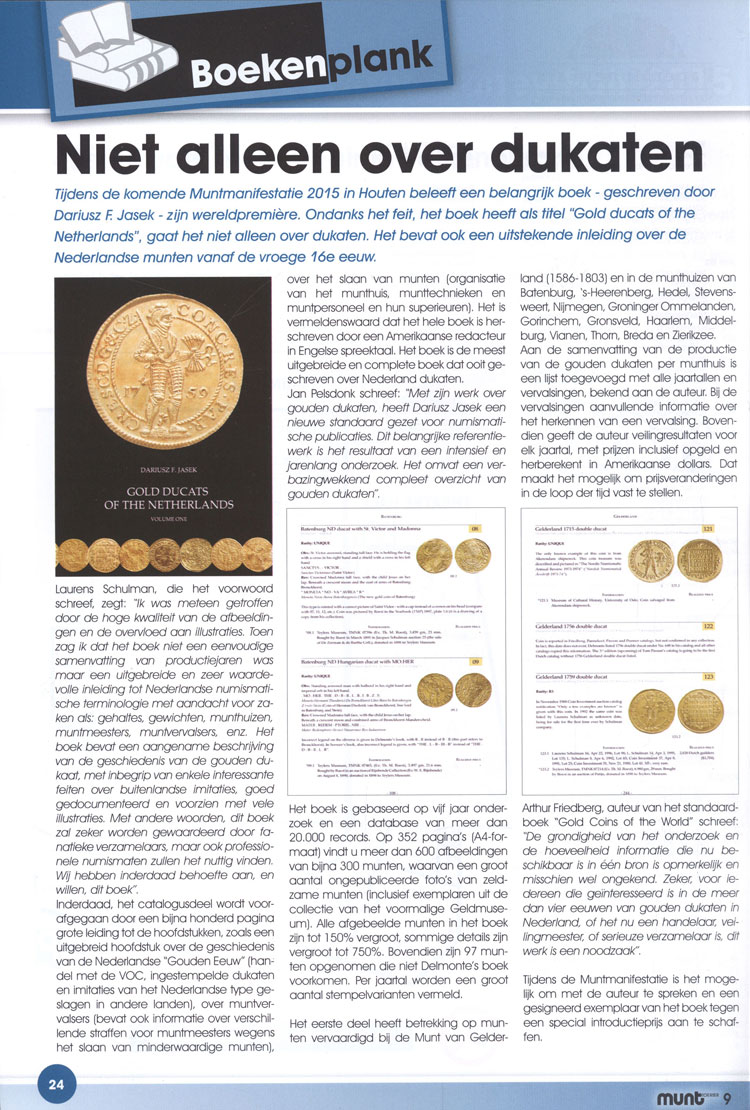 In the same MUNTkoerier issue the Wolrd Premiere of the “Gold Ducats of The Netherlands” book is announced with a small picture of the book cover: 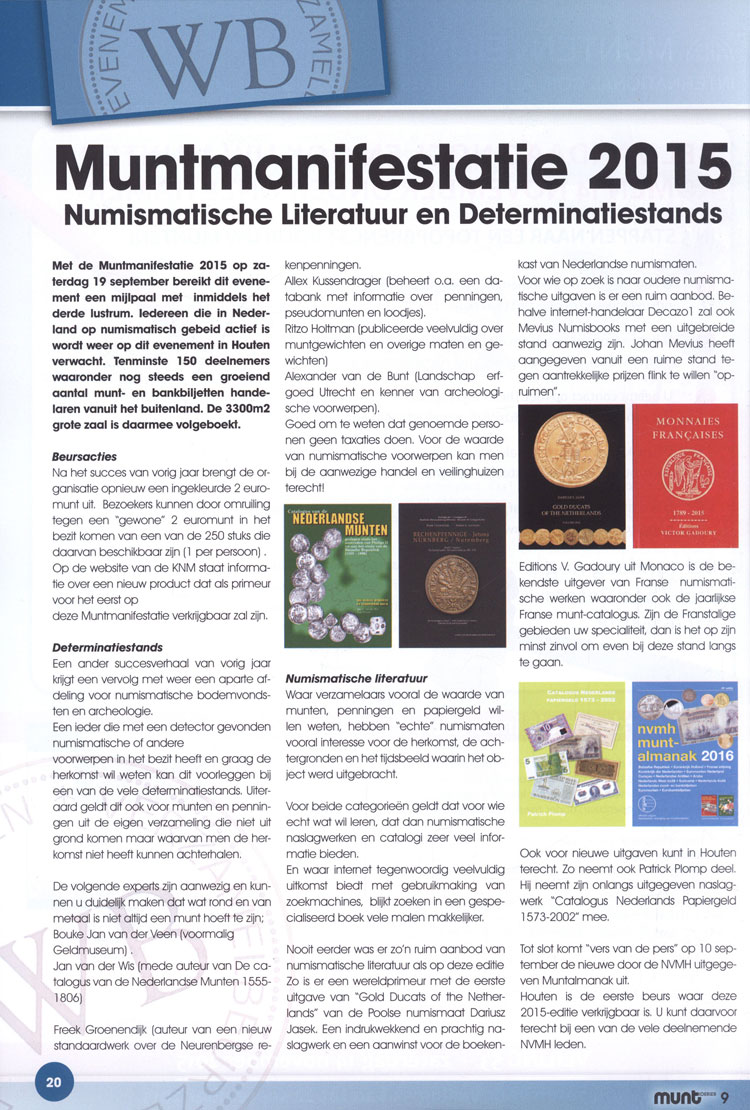