The research and database

A NOTE FROM THE AUTHOR

It all began with the Polish gold ducats in the fall of 2009, when I read that in the 17th and 18th centuries the Netherlands gold ducat was the major gold coin in Poland, despite the fact that at that time Polish gold ducats were also minted. What’s more, at that time Dutch ducats were called Polish ducats in various countries, like Italy, France and Germany. It was interesting enough to take a closer look to these coins.

It soon became clear that the literature on the subject was very limited, so in December 2009 I created Jasek’s Ducats Database – my own database of all Dutch gold ducats I knew. This is the way in which my research started. At that moment my only intention was to acquire knowledge for my own use. In the next year I added to my database all gold ducats listed on CoinArchives (over 3,000 coins at that time). Also every Dutch gold ducat I found, whether it was from an auction catalog, from coin dealer or a private collection, was added to the JDD database. The idea of writing the first comprehensive book about the Netherlands ducats appealed to me. 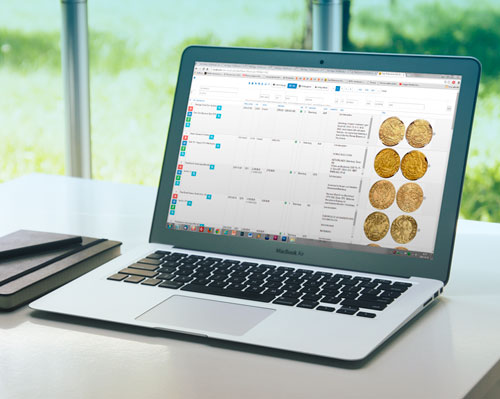 Jasek’s Ducats Database – the database of the Dutch gold ducats

In March 2011 I met Doug Prather, the editor of this book and an enthusiast of the Netherlands gold ducats. He encouraged me to continue my research and to buy the only known book written entirely about the Netherlands gold ducats – a red booklet, written by Albert Scheffers in 1986. As a result, I met Henk Lassche, the well-known literature dealer in the Netherlands. Thanks to Henk I established my relationships with many numismatists in the Netherlands, including Marcel van der Beek, Erik van der Kam, Paul Oostervink, Kees Pannekeet, Tom Passon, Jan Pelsdonk, Albert Scheffers, Laurens Schulman, Henk and Dim Verschoor, Jille B. Westerhof and many others. What began as a business relationship, often developed into friendship.

In July 2011 I received a couple of high resolution pictures of unique coins from the Geldmuseum Coin Collection. After October 2013 my research of ducats from the Geldmuseum stopped temporarily, because the museum was closed. Any access to the Geldmuseum coins, which were the most numerous set of the Netherlands gold ducats worldwide, as well as to their pictures was no longer possible.

In February 07, 2012 the largest coin hoard of almost 3,000 gold ducats was available for viewing in Cracow, the city where I was born and grew up. I did not miss the chance to see such great collection and several times I visited the exhibition making notes about rare ducats from the Kosice Gold Treasure, and comparing them with what I found in my library. It assured me writing this book was a good decision. Also, I took a part in a lecture given by its curator, Marek Budaj, supported by Bronislav Panis, the Director of The National Slovakian Museum. Because the first sketch of the book was ready, I showed it to Marek and Bronislav. They found it good enough to share with me excellent quality pictures of all 1,015 Dutch gold ducats from the Kosice Treasure, with permission to use them in my book. It is the basis of the photo documentation of each date in my book. Because of the great condition of these coins they are often the finest known. By the end of 2012 my Jasek’s Ducats Database had reached 8,000 ducats.

Between 2013 and 2015 I visited the Netherlands several times. During the Houten coin fair in October 2014 the first four chapters of this book were available for viewing. Because the book had been previously announced in MUNTkuerier, the well-known Dutch numismatic magazine, many people shared their knowledge, literature and data with me during the fair. In April 2015, during the General Assembly of the Royal Dutch Numismatic Society, of which I am a member, a copy of the nearly complete book was available for viewing. An extra copy was given to Laurens Schulman, who later wrote the foreword of this book. In this way one of the most important Dutch numismatists in history entered the pages of my book.

Shortly before printing this book, I managed to complement a number of missing images and information. First of all, thanks to Erik van der Kam it was possible to complete a series of photos of unique coins from the former Geldmuseum Coin Collection, now called Nationale Numismatische Collectie (NNC). The series of ducats minted by the Hedel mint is worth mentioning here. During this time period also I corrected some information about non-existent ducats, such as 1579 Batenburg ducat or 1664 Gronsveld ducat.

During my research I was granted access to many museum’s as well as to private coin collections. A number of coins are pictured in the book for the first time ever. What’s more, all the research is done from the ground up, it is not based on any other work. On the other hand all the references (like auctions, where a particular ducat was sold), listed by other authors were verified. And in this way a number of ducats which had been wrongfully attributed to collections such as the Hermitage Museum or the Vienna Coin Cabinet were found. It is worth mentioning that all forgeries known are listed in the catalog, with a picture or drawing (if possible) and with a complete information of how to recognize the forgery. Each bit of information about every particular coin is provided in the book with its source.

I asked many numismatists about their expectations for this book. Each note from this feedback has been considered and most of them – if not contradicting each other – was taken into account. One of them was the number and increased size of the pictures in this book. Perhaps the most significant aspect is that the entire book is written in the form and content I was hoping to find at the beginning of my studies in 2009. In writing this book, I wanted to move my readers back in time to the 16th century, to discover the entire history of the Dutch gold ducats, with many interesting issues regarding minting and counterfeiting ducats, and the importance of the Netherlands ducats in the trade with the Baltic area and with Asia.

While this book is comprehensive, it is not exhaustive. The research is not complete, despite the fact it is based on the Jasek’s Ducats Database – a database containing over 20,000 records. I am still missing many auction results, in particular from the 19th century auctions, as well as some pictures, books and notes from the archives. The research continues.